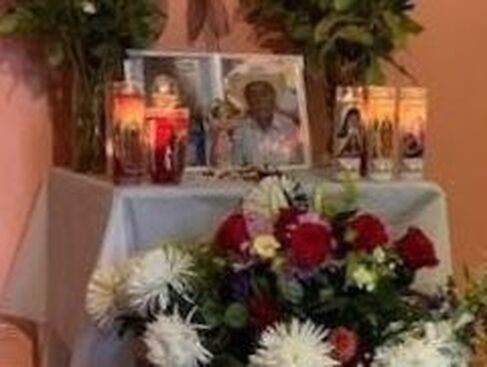 Memorial to My Grandpa

During Covid-19 many people lost someone or knew of someone who lost someone. It could have been a family member, friend or a neighbor. A person's loss makes them just lose yourself mentally, emotionally, and physically.
​
On July 28, 2020 I  lost the person who meant everything to me, the person who I saw for only three years. My grandpa passed away because of Covid. It was so heartbreaking. I completely lost myself. And I constantly miss him. There's not one day I don't think of him. He got Covid because nobody used their mask. He lived in a small town named Ahuehuetitla, Puebla, Mexico. Since it's a very small town nobody seemed to care about the virus. He worked in Acatlan De Osorio, Puebla, located 30 minutes away by car from his home. He would sell his seeds in the tianguis. He had his own little seed stand where he was very known. His name was Pedro Bravo. He has my dad's same face, literally they’re so identical.

On March 10, 2020 I traveled to Mexico for a party and I saw him. It  hurts me still to think about that visit.  It took my family from Mexico at least two weeks in July to let us know that he was sick and we could have done so much for him. He needed a ventilator, and if we had known earlier we could have gotten him a tank for him to get better. He was really old, but I wasn’t ready mentally and emotionally for him to pass. I don't think anyone is ready for that.  I miss his voice, I miss his soft hands, I'll miss his presence, his old man sense and his smile. He would always take his hat with him. Nothing will be the same anymore without him. I know he brought happiness.
​
He was literally everything to me. Everyone who knew him loved him. They knew him as the person who loved to help others and was just very respectful. After he passed away the family started separating. They started arguing over money and started going against each other. It just brought us all stress. Everyone always had something to say. During Covid is the time when you start seeing people's colors. They distanced themselves after his loss. Our relationship as a whole family isn't the same anymore. I hope one day we just get to sit down as a family.

My grandpa’s passing is about to come to a year anniversary and I don't even know if we're going to all be together. I wish I was able to go to Mexico but I can't. My mom isn't letting me because she's scared that I just won't be okay. And I'm also scared because I know how sensitive I am. You don't know what you have until it's all gone.